*THIS CONFERENCE HAS ENDED*

“Capability and Diversity in a Global Society”

The 2016 HDCA Program Committee cordially invites scholars, government policy makers, practitioners and other interested parties from all over the world to participate in the 2016 HDCA conference.  Original empirical research, theoretical issues, case-studies or reports of experiences, or findings from major research projects, and book panels relevant to conference theme or more broadly related to human development/capabilities approach will be presented.

“Capability and Diversity in a Global Society”

The capability approach is a widely-used framework for evaluating human well-being, freedom, and development. It has been developed partly because traditional approaches focusing on income or utility don’t adequately capture the diverse, plural, or multidimensional nature of human conditions and development experiences.

By selecting ‘diversity’ as an overall theme for the HDCA 2016 Conference, we want to exhibit the power and scope of the capability approach to describe, assess, and promote human development and social justice in an increasingly globalized world where people’s circumstances and values are vastly different and rapidly changing.

As a concept originally developed by Amartya Sen and Martha Nussbaum, capability is defined to reflect diversity and freedom of human experiences, and so in the set of valuable functionings that people have reason to choose. We have seen many examples of research, using various methods, to try to capture diverse aspects of human capability and development for specific purposes in different contexts. One of the main goals of the HDCA 2016 Conference will be to assemble and compare a variety of those attempts in different fields, disciplines, and regions, in order to shed light on the benefits of, and challenges for, such attempts.

Human diversity not only highlights the scope and versatility of the capability approach but poses many theoretical, conceptual, philosophical, and methodological challenges. For example, how can diversity meet the demands of impartiality required for our ideas of justice? Can we formulate a broad and inclusive framework to encompass diverse capability indexes? How can different methods better represent diverse characteristics and policy objectives of different societies?

The capability approach itself is still evolving and open to extensions, modifications, criticisms, and revisions. We would like to invite scholars, policy-makers, practitioners, and students who are working on the frontiers of this expanding field of research. Anyone new to HDCA is also more than welcome, as we appreciate diversity of participants in terms of research topics and methods, professions, and regions. It will be an exciting opportunity for all of us.

Ravi Kanbur is T. H. Lee Professor of World Affairs, International Professor of Applied Economics and Management, and Professor of Economics at Cornell University. He has served on the senior staff of the World Bank, including as Resident Representative in Ghana, Chief Economist of the Africa Region, and Principal Adviser to the Chief Economist of the World Bank. He has also served as Director of the World Bank’s World Development Report. He is Past-President of the Society for the Study of Economic Inequality, Chair of the Board of UNU-WIDER, Co-Chair of the Scientific Council of the International Panel on Social Progress, a member of the High Level Advisory Council of the Climate Justice Dialogue, a member of the OECD High Level Expert Group on the Measurement of Economic Performance, and a member of the Core Group of the Commission on Global Poverty. The honors he has received include an Honorary Professorship at the University of Warwick

Rima Khalaf is Executive Secretary, United Nations Economic and Social Commission for Western Asia. During her tenure as Assistant Secretary-General and Director of the Regional Bureau for Arab States at the United Nations Development Programme (UNDP), from 2000 to 2006, she launched pioneering projects to promote good governance, human rights and human development in Arab States, receiving international honors, including the Prince Claus Award and the King Hussein Leadership Prize. Prior to joining UNDP, she held many senior policymaking positions in Jordan, including Minister for Industry and Trade (1993-1995), Minister for Planning (1995-1998) and Deputy Prime Minister (1999-2000). As head of the ministerial economic team, she led the drive to reform and modernize the economy while simultaneously implementing a social package for building human capabilities, alleviating poverty and strengthening the social safety net.

Martha Nussbaum is Ernst Freund Distinguished Service Professor of Law and Ethics at the University of Chicago. From 1986 to 1993, she was a research advisor at the World Institute for Development Economics Research, Helsinki, a part of the United Nations University. She has chaired the American Philosophical Association’s Committee on International Cooperation, the Committee on the Status of Women, and the Committee for Public Philosophy. She has received honorary degrees from fifty colleges and universities in the world. Her books include WOMEN AND HUMAN DEVELOPMENT (2000), HIDING FROM HUMANITY (2004), FRONTIERS OF JUSTICE (2006), CREATING CAPABILITIES (2012), POLITICAL EMOTIONS (2013), and ANGER AND FORGIVENESS (2016). Among her awards are the Prince of Asturias Prize in the Social Sciences in 2012, and the Kyoto Prize in 2016.

Kaushik Basu is Senior Vice President and Chief Economist of the World Bank. Prior to this, he served as Chief Economic Adviser to the Government of India and is currently on leave from Cornell University where he is Professor of Economics and the C. Marks Professor of International Studies. He is a Fellow of the Econometric Society and has received India’s Padma Bhushan award, the inaugural Professor A.L. Nagar Fellow award, as well as the National Mahalanobis Memorial award. His academic contributions span development and welfare economics, industrial organization, and game theory.

Kotaro Suzumura is Professor Emeritus of Hitotsubashi University, Professor Emeritus and an Honorary Fellow of Waseda University, a member of the Japan Academy, and a Fellow of the Econometric Society. He has served as President of the Japanese Economic Association and President of the Society for Social Choice and Welfare. He edited Handbook of Social Choice and Welfare (Volumes 1 and 2) with Kenneth Arrow and Amartya Sen. He was awarded the Medal with Purple Ribbon for his academic contribution by the Government of Japan in 2004 and the Japan Academy Prize for his contribution to the non-consequentialist foundations of normative economics in 2006.

Sir Michael Marmot is Professor of Epidemiology and Public Health and Director of the Institute of Health Equity at University College London, and President of the World Medical Association for 2015-2016. Professor Marmot holds the Harvard Lown Professorship for 2014-2017 and is the recipient of the Prince Mahidol Award for Public Health 2015. He has been awarded honorary doctorates from 16 universities. He has led research groups on health inequalities for 40 years. He is an Honorary Fellow of the American College of Epidemiology, a Fellow of the Academy of Medical Sciences, an Honorary Fellow of the British Academy, and an Honorary Fellow of the Faculty of Public Health of the Royal College of Physicians. He was a member of the Royal Commission on Environmental Pollution for six years and in 2000 he was knighted by Her Majesty The Queen, for services to epidemiology and the understanding of health inequalities.

9:00 am-5:30 pm
Room 304, Lecture Building 1
Global justice, the capability approach, and social policy
With outset in Gillian Brock’s book Global Justice (OUP 2008), the Foundational Issues thematic group (FICA) will organize a pre-conference event on Brock’s cosmopolitan theory of global justice and related issues. The aim of the event is to consider how abstract discussions on global justice can translate into concrete policy advice, for example within a capability framework. In her book, Brock develops and defends a cosmopolitan account of global justice and shows how it can provide ample room for national self-determination and -governance while securing basic principles of justice. Brock has, both in her book as well as in subsequent work, applied her account of global justice to such policy issues as global poverty, taxation reform, nationalism, health justice, work exploitation, and responsibility. In the event, we will take up and discuss these relationships between global justice and concrete issues of global and national policy.

10:00 am -12:00 pm
Room 301, Lecture Building 1
Measuring Capabilities in educational contexts (workshop)
In this workshop we will explore measurement of capabilities using different methodological approaches. In order to do this, we will present a case-study of intercultural education in a higher education environment where potential expansion of capabilities might be happening. We will then split into three groups, with each discussing how capability measurement can be carried out from the following perspectives: a) quantitative,  b) qualitative, and c) participatory, trying to underline strengths and weakness of each. To conclude, we will have a plenary discussion on how the three approaches can be used / complement each other in order to arrive at a detailed picture of capabilities enhancement. (See related event and sign-up information below.)
2:00-4:00 pm
Field trip to Waseda University
We will meet with staff (and students) in the School of International Liberal Studies (SILS) in Waseda university to discuss internationalisation and diversity in HE settings in Japan. We will travel there by public transport from Hitotsubashi.

1:00-2:00 pm
Room 307, Lecture Building 2
The Measurement of Capabilities
Download the PowerPoint presentation here
In this workshop, Professor Paul Anand will provide an overview of the capabilities measurement project which has sought to develop full and explicit measures of capabilities for use in household, national and other surveys. The workshop will give a brief philosophical and institutional background to the approach before highlighting the theoretical structure developed by Sen (1985) which Anand and colleagues have shown to be fully ‘workable’ – as Rawls questioned the approach. Following Sen’s approach we discuss measures of functioning, states, happiness and most importantly capabilities including non-cognitive traits. The project has covered applications to working age adults, the cost of domestic violence, the situation of Irish travellers, the consequences of disability (mobility impairment) contributing to the ‘Beyond GDP’ work of the OECD and in more recent work has started to highlight the value of social resources and behavioural insights for understanding how entitlements might be achieved.
The workshop will also draw on recent project work for the UNDP, argue that subjective measures are indeed also valuable in understanding human development. We conclude that one of the many values of the approach is that it provides a structure for understanding how wellbeing, quality of life or human flourishing is produced and distributed.
Key Readings
Anand P 2016 Happiness Explained, Oxford, Oxford University Press Anand, P., Hunter, G., Carter, I., Dowding, K., Guala, F. and Van Hees, M., 2009. The development of capability indicators. Journal of Human Development and Capabilities, 10(1), pp.125-152.

2:00-4:30 pm
Room 308, Lecture Building 2
UNDP Pre-Conference Workshop: Teaching Human Development in Universities and Beyond
Lead Organiser: Jon Hall, The Human Development Report Office, UNDP
This workshop will be of particular interest to those actively engaged in teaching human development and the capability approach. It will also be of interest to individuals thinking about introducing human development courses in their institutions and organisations.

The Human Development Report Office at UNDP wishes to help support human development thinking and practices around the world. One way to do this is through educational courses including those which can help universities to encourage students to think critically about different approaches to human development. In addition, the learning resources being developed by UNDP aim to support those engaging with government departments, policy-makers and/or NGOs. UNDP has prepared a module entitled, “Introduction to Human Development” and it will soon be freely available online –in several languages – for teachers to use. This session will introduce the new UNDP module and materials with the aim of gaining feedback for future development and dissemination. UNDP is particularly keen to discuss how this resource and others could be made more useful to members of the HDCA and beyond. We will also discuss future priorities in developing additional material and resources and whether and how HDCA members could become more closely involved. 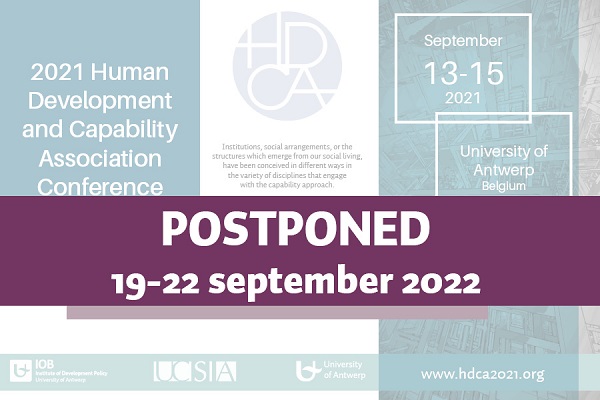