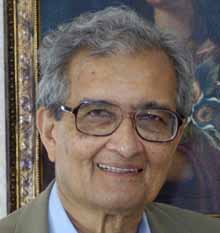 This lecture series celebrates Amartya Sen’s important contributions to the fields of human development and capability. It focuses on themes from Sen’s wide ranging contributions to these areas, ranging from his work on capability and freedom to his related works in areas such as democracy, development, gender, liberty, welfare, poverty, famine and social choice. Since 2011, the lecture takes place annually at the HDCA conference, and is supported by Taylor & Francis, the publisher of the Journal of Human Development and Capabilities. Below is a list of lectures to date: